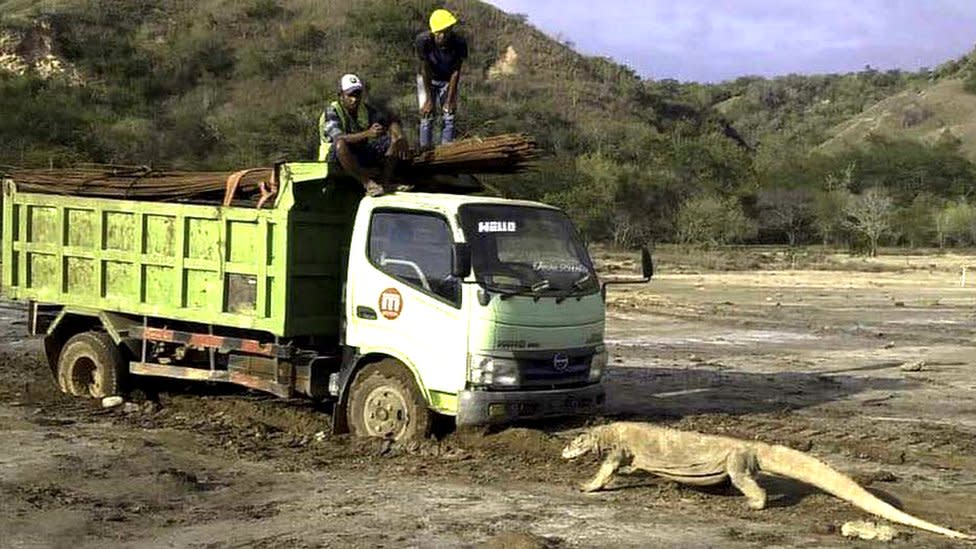 A photo of a Komodo dragon facing a truck has raised concerns about a “Jurassic Park” attraction being built on an Indonesian island.

The multi-million dollar site is part of the government’s plans to overhaul tourism in Komodo National Park.

The viral image has sparked questions about the impact on the conservation of the famed dragons, the world’s largest lizards.

Officials said no dragons had been harmed and their safety was paramount.

Komodo dragons are only found in the wild on a handful of Indonesian islands where they are estimated to have roamed for millions of years.

They draw visitors from around the world and in recent years authorities have grappled with how to manage conservation and tourism in the national park.

Last year a controversial decision to close Komodo Island – home to most of the lizards – and expel the 2,000 inhabitants who have lived alongside the reptiles for generations was dropped.

Instead authorities said they would introduce a $1,000 membership scheme to visit the island, moving away from mass tourism in a bid to protect the dragons and their habitat.

But around the same time they also unveiled plans for a mass tourist development on neighbouring Rinca Island, which is home to the second-largest population of Komodo dragons.

The project has been dubbed “Jurassic Park” in Indonesia after the architects posted a video last month on Instagram of their proposal – set against the music from the dinosaur film franchise. The video generated a lot of attention as it was shared by local campaigners on social media.

The development, scheduled for completion by June 2021, is expected to include a tourist information centre and a jetty.

Why has the photo triggered debate?

Over the weekend an image of a Komodo dragon facing a construction truck on Rinca Island was widely circulated on Twitter and Instagram.

It was shared by Save Komodo Now, a collective of activists, who wrote: “This is the first time Komodos are hearing the roar of engines and the smell of smoke. What will the future impact of these projects be? Does anyone still care about conservation?”

Greg Afioma, a member of the coalition, told the BBC that the group is concerned the planned development will negatively impact the reptiles and the residents.

“This kind of massive development disturbs the interaction of the animals. It will change their habitat,” he said.

Government officials told the BBC they had reviewed the photo being shared on social media and could confirm no Komodo dragons had been harmed during the construction work.

“No Komodo dragons will become victims,” said Wiratno, Director-General of Nature Conservation and Ecosystems at the Indonesian Ministry of Environment and Forestry.

He added that a team from his ministry would go to the island to ensure safety protocols were being followed to protect the dragons.

Indonesia currently has a Komodo population of about 3,000, according to government data. The dragons can grow up to 3m (10ft) long, have razor-sharp teeth and a venemous bite.

Most of them – around 1,700 – live on Komodo Island, and around 1,000 more live on Rinca. The national park as a whole is a Unesco World Heritage site.