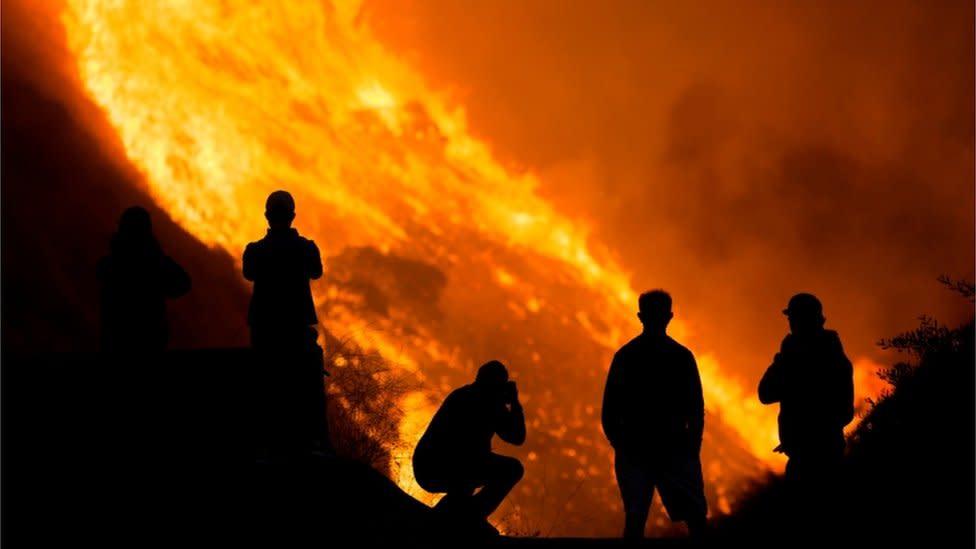 Two fast-moving wildfires in the US have triggered evacuation orders for 90,000 people in southern California.

The Silverado Fire broke out early on Monday in Orange County, south of Los Angeles.

Later in the day, another blaze, dubbed the Blue Ridge Fire, threatened nearby Yorba Linda.

About 14,600 acres (5,900 hectares) have already been engulfed, officials said, and two firefighters have been seriously injured.

The Silverado Fire, in the foothills of Irvine, is the larger of the two and quickly spread, fanned by strong winds and dry conditions. More than 70,000 residents were told to evacuate.

“Firefighters continue to battle flames throughout the night on the Silverado Fire,” Orange County Fire Authority said in a Facebook update on Monday night. “More than 8,000 acres have burned but we have no reports of structures lost at this time.”

The Blue Ridge Fire erupted in Santa Ana Canyon and quickly covered more than 6,600 acres as it headed towards Yorba Linda. About 20,000 residents have been told to leave.

Orange County Fire Authority Chief Brian Fennessy said two firefighters – aged 31 and 26 – had been “gravely injured” by the Silverado Fire and were in hospital with second- and third-degree burns.

The National Weather Service warned that a combination of strong winds and low humidity levels was expected to create “the most dangerous fire weather conditions” this year.

The causes of California’s devastating wildfires have become a political battleground.

State Governor Gavin Newsom has blamed climate change while President Donald Trump has instead pointed to land management practices as the key driver.

An analysis by scientists, published last month, found an “unequivocal and pervasive” role for climate change in driving the scale and impact of wildfires in California.