How to use audacity Get 750 SFX

Jared Kushner: African Americans must ‘want to be successful’ | US & Canada News 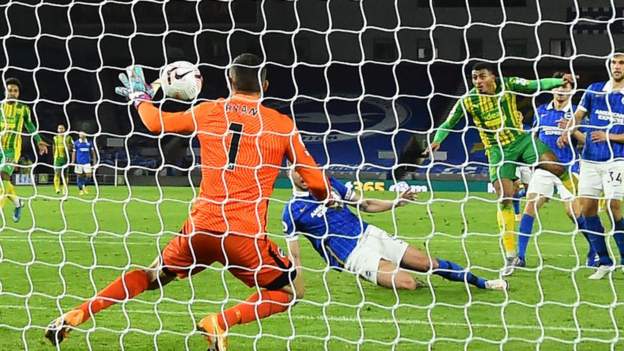 Karlan Grant scored his first goal for West Brom to rescue a point and deny a frustrated Brighton their first home win of the season.

In only his second game since joining from Huddersfield Town less than two weeks ago, Grant collected a low cross from Callum Robinson and crafted space before firing home an equaliser with seven minutes remaining.

The finish cancelled out Jake Livermore’s first-half own goal, which arrived when Branislav Ivanovic desperately slammed the ball in off his team-mate with Brighton’s Neil Maupay lurking.

Brighton restricted West Brom to shots from range but after Matheus Pereira had twice gone close for the away side, Grant powered home from 12 yards.

The point leaves Brighton 16th in the Premier League, two points above West Brom who sit 17th and are still without a league win since being promoted.

Brighton boss Graham Potter must have believed his side were set to secure a first win since an eye-catching 3-0 triumph at Newcastle over a month ago.

Since then two defeats and now two draws in the league have prompted questions as to when his side will marry results with an easy-on-the-eye style.

A 15-minute first-half spell saw them find a rhythm which looked like it may prove decisive.

Adam Lallana unselfishly set up Maupay to force West Brom keeper Sam Johnstone to save with his legs and Leandro Trossard brought another stop shortly after.

However, they offered little after the break and ultimately only had one shot on goal in the second period.

There are promising signs in that they appeared well organised even without the suspended Lewis Dunk but their lack of desire to finish West Brom off ultimately contributed to Slaven Bilic’s side comeback.

Lallana lasted 60 minutes and is yet to complete a league game since joining from Liverpool but the positions he picks up offer hope he will provide creativity around the ever-willing Maupay.

There are unquestionably smart aspects to Brighton’s approach but – not for the first time – Potter may wonder if he can add a touch of grit at key moments.

After the draw, Bilic spoke of his disappointment over the club’s decision to sell Egyptian defender Ahmed Hegazi to Saudi Arabian outfit Al-Ittihad despite him being part of his plans for the trip to Brighton.

Bilic is reportedly furious with the move but he appeared thrilled with his players as he embraced them in the tunnel after their late equaliser.

The Croatian manager felt his side would have won the game with an extra 10 minutes and he praised the impact of substitutes Callum Robinson and Kyle Edwards just after the hour.

Edwards came on for Grady Diangana, who had been West Brom’s outlet when they did muster attacks in the first half, so Bilic deserves praise for a brave switch with his side staring a sixth game without a win in the face.

They stuck to their task, with Pereira’s influence growing and a more attacking approach in the second 45 minutes led to both he and Krovinovic picking up shooting opportunities around the edge of the box.

The Baggies had six shots in the second half to their hosts’ one. None was more important than Grant’s powerfully struck goal first for the club. The striker later admitted he found it “lonely” up against three central defenders and although he was kept quiet for long spells, he took his chance when it came, firing high into the net after a good first touch.

“If I had to pick one player to score it would be him and he took it like a proper centre forward,” said Bilic.

“We were still looking for the win but the point is very good for us. Our approach was to win but we have to be positive and take this point, especially with this type of performance.”

‘Frustration and determination’ – what the managers said

“Credit to West Brom, I think they responded well. They played better in the second half and pushed us back and they deserved their equaliser. We have to learn from that.”

West Brom boss Slaven Bilic, speaking to BBC Sport: “To come here and that second-half performance made me happy and made me proud. If it was 10 more minutes I had he feeling it was us who would score a second goal.

“I said to be more brave and to risk a bit more in their box. Show determination. We passed so many good balls in the second half in this pockets that was hurting them. The whole package beyond the point makes it a very good result for us.”

Brighton travel to Tottenham on Sunday 1 November (19:15 GMT) before West Brom face the side bottom of the Premier League – Fulham – at Craven Cottage the following day (17:30).