How the End Sars protests have changed Nigeria forever

Star Wars: Squadrons Is the Soaring Antidote to Force Fatigue 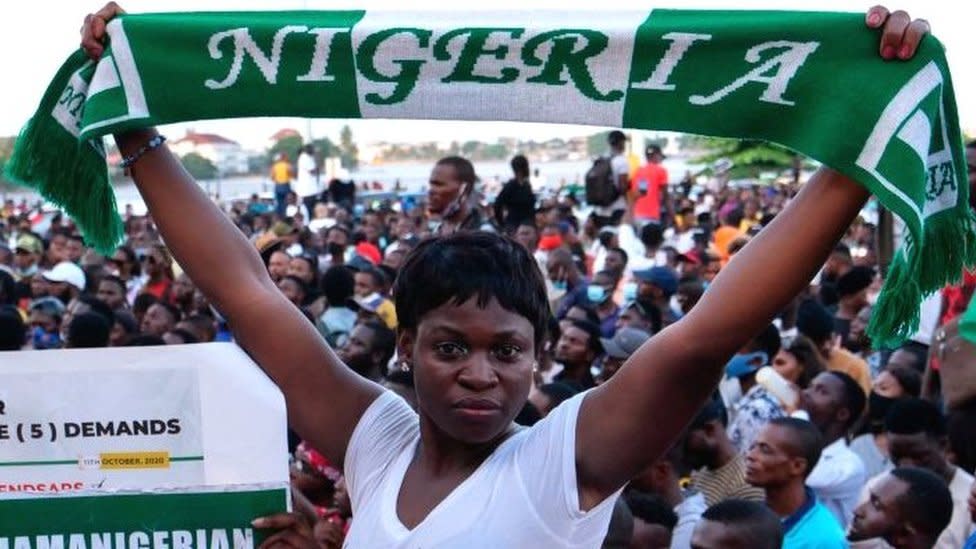 The anti-police brutality protests in Nigeria created a powerful movement that appeared to shake those in power, but after a turbulent fortnight, BBC Hausa editor Aliyu Tanko considers where it goes from here.

A potent mix of street protests and social media has given young Nigerians a voice that has shattered the country’s culture of deference.

As the #EndSARS hashtag went viral, so did a defiance of the elite in Nigeria.

The trashing of the palace of the highly respected oba, or traditional ruler, of Lagos was symbolic of this mood.

The youths dragged his throne around, looted his possessions and swam in his pool.

What began as a protest against the hated police Special Anti-Robbery Squad (Sars) has become a conduit for the youth to vent their anger with the people who have been in charge of Nigeria for decades, and demand change.

Former President Olusegun Obasanjo warned in 2017 that “we are all sitting on a keg of gunpowder” when it comes to the young.

His comments were about the continent in general but they apply to Nigeria, Africa’s most populous nation with 200 million people, more than 60% of whom are under the age of 24.

The majority of those of working age do not have formal employment and there are few opportunities to get a good education. Earlier this year, government statistics showed that 40% of Nigerians lived in poverty.

But those currently in power at first misunderstood what was going on this time, activist and writer Gimba Kakanda told the BBC.

“The #EndSARS protests were initially perceived as another of the youths’ episodic mischief-making that would fizzle out if left unaddressed,” he said.

“This mind-set of the political class, almost overly condescending, was the reason for its slow response to this unprecedented movement and left them all on the edge.”

The question is where does that movement go now?

The success of the protest in forcing concessions from the government – such as a promise to disband Sars, and wider police reform – has given Nigerian youths confidence and they believe that they can make a difference.

A few days into the protests, activists were able to establish a helpline that could respond to emergencies. They also provided legal services to those in need and even set up a radio station.

These were financed through crowdfunding and were cited as examples of how Nigeria could be better if it were not for the politicians who often seem more interested in what they can personally gain, rather than how they can improve the country.

But there has also been an ugly side.

While those who backed and came out in support of the #EndSARS movement were peaceful, another segment of the youth saw the protests as an opportunity.

They vandalised shops, raided warehouses and targeted the businesses of prominent politicians.

Although the approach of these two groups is different, they do share one thing in common: a disdain for those in charge.

It is unlikely though that they can find common cause. Any move in that direction may affect the spread of the movement across the country because some will find it hard to sit at the same table as people with “questionable character”.

There is nevertheless an awareness on the part of the authorities that poverty and hardship are national security threats, activist Mr Kakanda said.

“The government has realised that it can no longer take such outrage for granted as it has done before,” he added.

But it continued to make missteps in trying to quell the mood.

President Muhammadu Buhari’s address to the nation on Thursday evening “missed the point by a wide margin”, according to blogger and columnist Japheth Omojuwa.

Mr Buhari called for an end to the protests and the beginning of a dialogue, but “he will be remembered for threatening Nigerians just because they asked their government to commit to justice”.

Nevertheless, Mr Omojuwa believes that the #EndSARS movement can achieve something.

It should not focus on long-term ambitions of gaining political power, he argues, but rather should make sure that the authorities stick to their promise of reform and bringing errant policemen to justice.

It is these small steps that may eventually bring wider change.

This tumultuous fortnight and particularly the shooting of protesters in Lagos on 20 October will be remembered in Nigeria for a long time.

Those in power are clearly worried that the country’s huge young population can no longer be ignored, or, failing that, cajoled.

It is getting organised as evidenced by the huge donations received by a relatively unknown group – the Feminist Coalition – that rallied support for the protests and shook the foundations of Nigeria.

The fact that these young women said they would regroup makes the elite jittery and clearly indicates that the system needs to work for all and not for the privileged few.

From this episode, Nigerian politics has changed forever because the youths have realised how powerful they are and what they can achieve when they unite for a common goal.