You Can Now Get a COVID-19 Vaccine in China. That Might Not Be a Good Thing

Babies May Be Drinking Millions of Microplastic Particles a Day 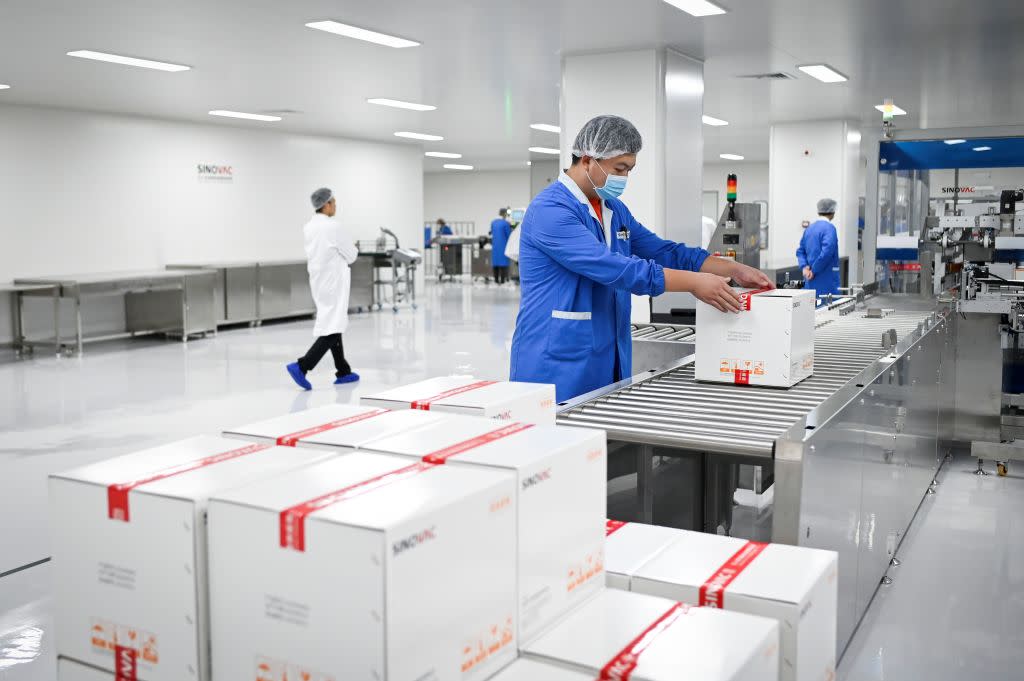 A staff member works during a media tour of a new factory built to produce a COVID-19 coronavirus vaccine at Sinovac, one of 11 Chinese companies approved to carry out clinical trials of potential coronavirus vaccines, in Beijing on September 24, 2020. Credit – Wang Zhao–AFP/Getty Images

Li Shurui didn’t hesitate. Faced with putting his life on hold indefinitely or the risk of catching COVID-19 by returning to university in the U.K., the 22-year-old business student decided to roll up his sleeve and receive an experimental coronavirus vaccine.

Two injections of CoronaVac made by SinoVac (otherwise known as Beijing Kexing Bioproducts) cost 2,000 rmb ($300) at the private Taihe Hospital in the Chinese capital. The treatment still hasn’t passed final (Stage 3) clinical trials but is already being offered to the public on a first come, first served basis. Anyone can turn up, pay their money and get the jab. Li says hundreds were queuing to get immunized at the same time as him.

“I’m a little worried about side effects but more worried catching the virus overseas,” Li tells TIME. “But I haven’t had any problems from the jabs so far.”

It’s not just the CoronaVac vaccine on offer in China. An unofficial vaccine rollout is gathering pace despite the warnings of international public health experts. In September, state-owned SinoPharm revealed that hundreds of thousands of Chinese had already taken its experimental COVID-19 vaccines as part of a state initiative to protect frontline health workers and officials traveling to high-risk nations. In the eastern manufacturing hub of Yiwu this week, hundreds of people queued for a $60 dose of CoronaVac.

Read more: ‘We Will Share Our Vaccine with the World.’ Inside the Chinese Biotech Firm Leading the Fight Against COVID-19

“This is insane,” Adam Kamradt-Scott, associate professor specializing in global health security at the University of Sydney, says of China’s gung-ho vaccine rollout. “It is just unsound public health practice. We have previous examples of where vaccines that have not gone through sufficient clinical trials have demonstrated adverse reactions with long-term health consequences.”

As the coronavirus pandemic approaches its 11th month, with over 40 million cases and 1.1 million deaths globally, longing for a miracle cure becomes more desperate. But the consequences of a vaccine misstep could also be dire. In 1976, a rushed campaign to immunize millions of Americans against swine flu subsequently resulted in a small proportion developing chronic fatigue syndrome and helped spark the modern anti-vaxxer movement. Handing out a pre-approval vaccine without sufficient monitoring of efficacy and health of participants risks stoking public misinformation.

Read more: How an Election-Year Vaccine Rollout in 1976 Backfired

What’s more, since COVID-19 cases are so low in China, Stage 3 trials—when the vaccine is given thousands to see how many become infected, compared with volunteers who received a placebo—can only be conducted overseas. There have also not been any “challenge” trials where scientists deliberately expose vaccinated volunteers to the virus to test immunity. (Although controversial, such trials are about to go ahead in the U.K.)

But it’s not just China that’s getting ahead of itself. U.S. President Donald Trump has put enormous public pressure on regulators and pharmaceutical companies to make a vaccine available in time for the American election. On Oct. 16, Pfizer revealed it may begin rolling out its vaccine for emergency use in the U.S. by late November. Moderna has a similar timeline for emergency use, though cautions widespread vaccine distribution may not happen until the spring.

The difference in China, however, is that the virus has been largely contained domestically. The country reported only 14 cases on Wednesday, all imported. “It seems there is no need to get a vaccine in China,” says the student Li. “After all, the pandemic has little impact on life in China now; even masks are not mandatory here anymore.”

So why is China so aggressively rolling out vaccines? For the Beijing government, the fight against the pandemic has become a PR battle to drown out international criticism about its early mishandling, coverup and silencing of whistleblowers. Instead, China wants to rebrand itself as a source of vital PPE and, ultimately, a solution the crisis. China’s National Health Authority projected China’s COVID-19 vaccine production capacity will reach 610 million doses annually by the end of 2020. SinoPharm’s boss says his firm alone may be able to produce more than 1 billion doses next year.

Read more: Inside the Unprecedented Scramble to Immunize the World Against COVID-19

Sinovac has promised to supply 40 million CoronaVac doses to Indonesia by March 2021. São Paulo Governor João Doria said Brazil’s federal government had also agreed to buy 46 million doses of CoronaVac, one of at least five vaccines undergoing stage 3 trials in the country, which has the world’s third highest infection tally.

“The first results of the clinical study conducted in Brazil prove that among all the vaccines tested in the country, CoronaVac is the safest, the one with the best and most promising rates,” Doria told reporters Monday.

Of course, China is not alone in craving the PR benefits. On Aug. 11, Russian President Vladimir Putin unveiled what was ostensibly the world’s first COVID-19 vaccine, which he said had already been administered to his daughter. The trade name—Sputnik 5, after the groundbreaking Soviet satellite—leaves no doubt at the national pride wrapped in its development. But it was tested on only 76 people—38 in Phase I and 38 in Phase II trials—and hadn’t even entered phrase 3 trials. The vaccine hasn’t stopped COVID-19 from spiking to record levels in the country this month.

“My gut reaction is that this is China’s attempt to claim international prestige by being first to rollout a widespread vaccination program,” says Kamradt-Scott, the Australian global health expert. “Unfortunately, I just see politics at play here rather than public health.”

The original version of this story incorrectly stated that Beijing Kexing Bioproducts and SinoVac are separate companies. They are the same.