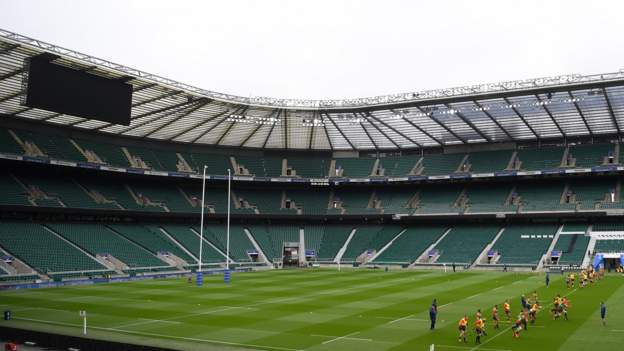 England’s match against the Barbarians on Sunday is in doubt after several of the invitational side left their hotel for a night out, contrary to the fixture’s Covid-19 restrictions.

The players involved have been expelled from the Barbarians squad.

The game now depends on whether enough players with an up-to-date Covid testing record can be brought in.

Barbarian FC expressed their “extreme disappointment” in the conduct of the players involved.

An update on whether the game can go ahead is expected on Friday afternoon.

The players involved in Wednesday night’s unauthorised excursion were kept separate from the rest of the Barbarians squad on their return to the hotel.

Although they are due to be tested for coronavirus again before Sunday’s match at Twickenham, the Rugby Football Union stated it would “not be possible to guarantee that these players are not infectious in the period up to and including the match”.

“The RFU scheduled the fixture to provide a warm-up game ahead of the postponed Italy v England Guinness Six Nations decider, however, it will not compromise the safety of players to do so,” it added.

The identity of the players involved in the breach has not been revealed.

The Barbarians squad for the fixture is largely a mix of English-based players and Fijians. Former England captain Chris Robshaw and veteran Saracens and England scrum-half Richard Wigglesworth are among the selection.

The build-up to Barbarians games is famous for its focus on socialising and the team management installed a team-room in their London base to keep the players entertained.

Leicester wing Nemani Nadolo, who has played twice for the Barbarians, and Bristol Bears, who had been on standby to take part in Saturday’s Premiership final before Wasps were shown to have contained a Covid-19 outbreak, were among those to offer their services to the Barbarians on social media.