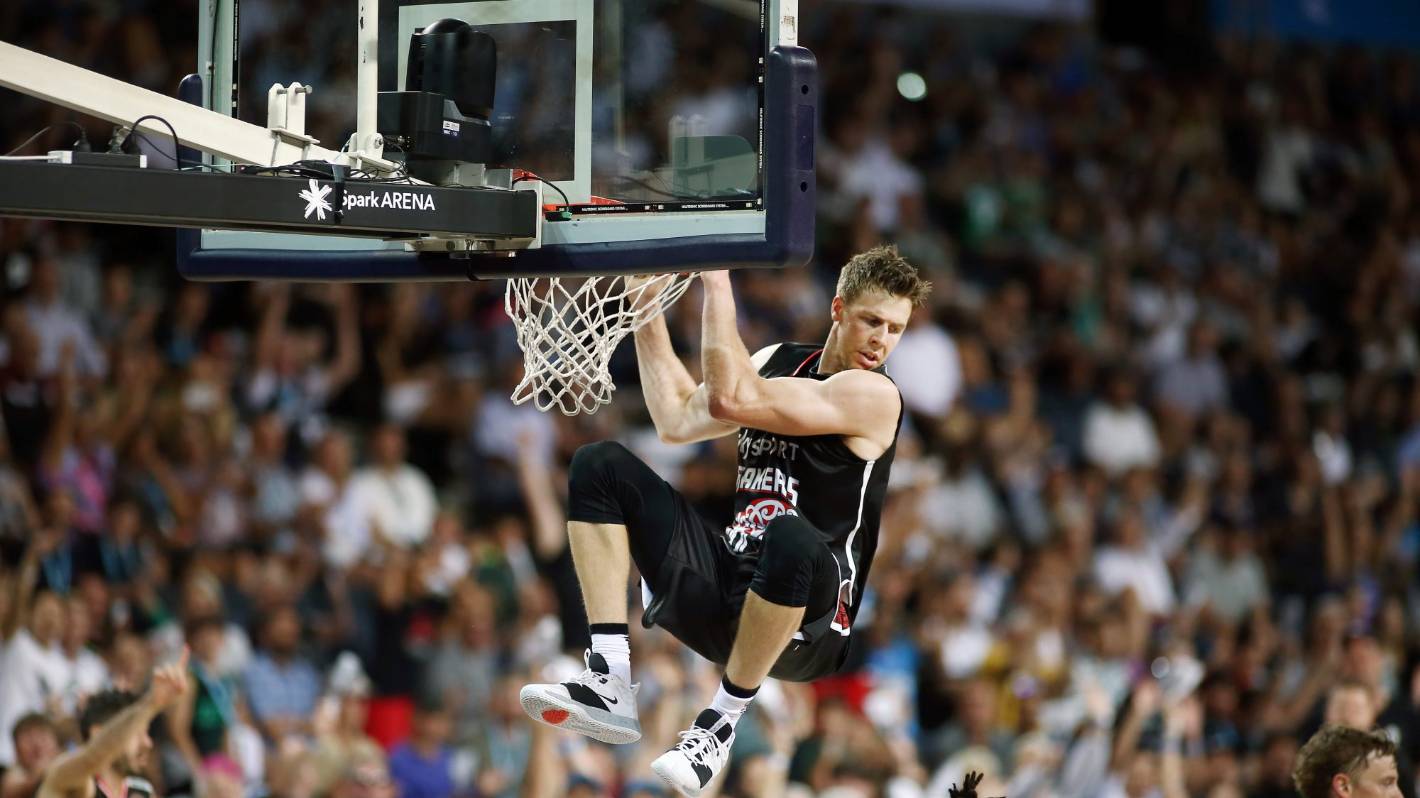 There was a story doing the rounds last month that had Tom Abercrombie potentially missing the upcoming Australian NBL season because he did not want to be apart from his young family.

Not true, clarified Abercrombie for Stuff at this week’s launch of the Breakers’ All-Star Celeb Slam, at once putting fans of the Kiwi Australian NBL club at ease. The 33-year-old Tall Black confirmed he would play a full part in the upcoming campaign, due to tip off in mid-January, whatever format the competition takes.

At the heart of the issue is the likelihood the Breakers will have to be based in Australia for either all or part of their season, given the travel restrictions in place because of the Covid-19 pandemic.

At this stage the NBL has said it is still working on the format for the league, the organisation clearly hoping travel and venue restrictions will ease in time to allow games to play out as per normal in front of full stadiums.

However, unless a trans-Tasman bubble opens up, or a vaccine is found, it appears unlikely there will be unrestricted travel when the league finally gets going, either as planned in January, or a little later in February.

The Breakers are pretty much resigned to being based in Australia for all or part of their season, with their preferred situation playing all their road games over the first part of the campaign from an Australian base (likely the Gold Coast) and returning to New Zealand to host home fixtures over the back part of the schedule.

But that still pre-supposes an absence of border restrictions and such like by the middle part of next year, which they’re well aware remains in the doubtful category.

The Breakers are gathering some high-profile Kiwis to play hoops for a good cause.

Abercrombie, who will captain Dan Shamir’s team in the celebrity game at Spark Arena on November 26, told Stuff it was tough to plan for a league that had no certainty as yet, but affirmed he would be suiting up regardless.

“I think what I said was I’m not quite sure how I’m going to leave my family at home for three months by themselves,” he explained. “I’m hoping they’ll be able to join us for part of that. Hopefully by January, when we have to go over there, families are able to come for some or part of that.”

But he said he and wife Monique would find a way regardless to make it work with their three children aged four or under.

“They’re a tight little bunch, and all have their challenges and things as well. It’s hard to prepare for anything when you don’t have any concrete information to hand,” he said.

“Whatever happens, we’ll find a way to get through it. The priority and the goal is to have them come along with us, but whatever happens they’ll be well looked after.

“Everyone has their personal situations and I know the NBL is talking to each player to find out what those are to best accommodate their circumstances.

“The luxury they have had is all this time to prepare and hopefully they’ve used that time wisely.”

Abercrombie said the long off-season – nearly a year in total – presented its challenges as he prepared for his 13th straight season with the club.

”I’ve been trying to stay in shape. We’ve been training, but you definitely miss that real competition aspect and the 5-on-5 stuff that we haven’t been able to get so much. This is a little different than I thought our first game back would be, but I’ll take it,” he said of the celebrity affair that has the likes of UFC champ Israel Adesanya, boxer Junior Fa, Silver Fern great Irene van Dyk, Warriors star Roger Tuivasa-Sheck and Winter Olympics bronze medallist Zoe Sadowski-Synnott lining up alongside Breakers to raise money for Starship.

You could say it’s a cause close to Abercrombie’s heart.

“Our oldest boy has autism, and our middle daughter, she’s a heart kid, so we’ve spent a lot of time in Starship over the years, in the heart wing, and all sorts of other things as well,” he said.

“We were in there for a week just last week with our oldest one when he had some health issues. We’ve been in there a lot, and we know how awesome the people there are and what an amazing job they do for every kid. No matter who they are coming in there, they get the same amount of love and attention.

“So for me to be able do this and give something back is absolutely awesome.”

With the NBL tipoff being pushed back so late, Abercrombie said the pre-season was going to be ”crucial” in terms of getting teams game ready.

“Who knows what that pre-season is going to look like, and if guys are going to come down and practise with us, or if we have to meet them in Australia,” added Abercrombie. “There are so many unknowns, but we’ll be able to scrape together enough players to practise properly when the time comes.

“We just need a bit more certainty about when that time is. It’s been long time since we’ve played basketball, and the more 5-on-5, the more competitive stuff we can do in the leadup, the better.”