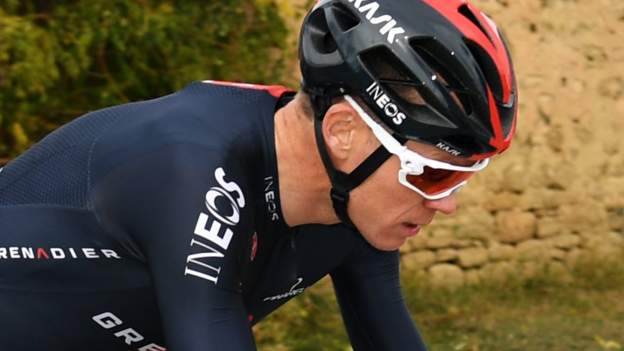 Froome, 35, fell back from the peloton with 41km to go of the hilly 152km stage from Pamplona to Lukenberri.

Primoz Roglic of Jumbo-Visma retained the leader’s red jersey as he finished among his rivals, 19 seconds behind Movistar rider Soler.

What will Froome do now?

Froome will focus on supporting third-placed Richard Carapaz, something Ineos say was always part of the team’s plans.

Froome himself said he had no expectations for this race, but seeing him lose touch with the peloton on consecutive days is still a surprise for an athlete who won four Tours de France – and very rarely lost touch with the pace of any race in which he competed.

Despite losing so much time, Froome will want to race on and rediscover his form in racing conditions, while aiding the team’s objective of trying to win the general classification.

Any thoughts of trying to win a single stage himself will be on hold while Carapaz is in contention.

Carapaz showed plenty of strength and potential during September’s Tour de France, despite losing out on the king of the mountains classification on the penultimate stage to eventual winner Tadej Pogacar following a dramatic time trial up to La Planche des Belles Filles.

Wild horses couldn’t keep him away

Soler broke away from the main group on the descent to Lukenberri, near the Spanish-French border, with 14km to go following the climb up the category one Alto de San Miguel de Aralar.

As the leaders chased Soler, a group of five small Asturcon wild horses, local to the northern Spanish Basque region, burst out of roadside trees and into the group containing Roglic, Ireland’s Dan Martin of Israel Start Up Nation and other contenders.

Miraculously, no-one was knocked off their bike as riders took evasive action, but it helped Soler maintain his slender advantage.

Roglic leads the general classification by nine seconds over Martin, with Carapaz 11 seconds down in third and Britain’s Hugh Carthy of EF Pro Cycling 20 seconds further back in seventh.

Thursday’s 166km stage from Lodosa to La Laguna Negra-Vinuesa has a category one summit finish.