As millions slip into poverty, voting may be the only leverage for a 2nd stimulus check 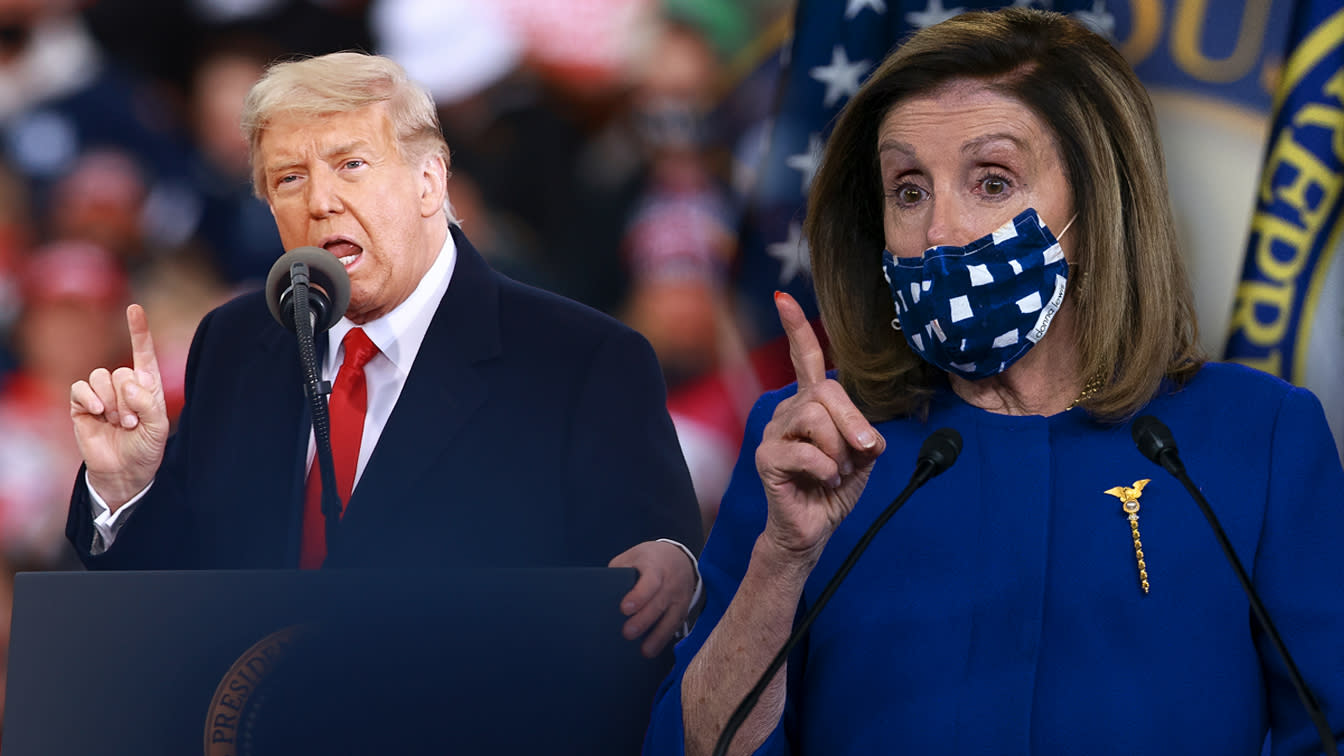 Shannon O’Brien’s daughter turns 15 years old on Wednesday, an early milestone for any teenage girl. But this birthday will be unlike any other the young girl has experienced before.

For O’Brien, 48, this year has been clouded by uncertainty since he lost his job as a bartender in March due to the coronavirus pandemic. Now O’Brien, who is from upstate New York, doesn’t know if he will be able to get his daughter a birthday present this year because he receives so little from unemployment and he’s drowning in unpaid household bills.

“I’ve had to sell family heirlooms,” he told Yahoo News in a video interview. “I’ve had to bum money from friends just to get by, and it’s humiliating.”

O’Brien, like millions of Americans across the country, is now dependent on the government to help make ends meet with a second stimulus bill. Earlier this month President Trump called on Congress to pass additional coronavirus relief measures, hours after initially announcing that he was calling off negotiations until after the November election.

“The House & Senate should IMMEDIATELY Approve 25 Billion Dollars for Airline Payroll Support, & 135 Billion Dollars for Paycheck Protection Program for Small Business,” Trump tweeted on Oct. 6. “Both of these will be fully paid for with unused funds from the Cares Act. Have this money. I will sign now!”

On Tuesday, Trump doubled down, making another appeal for Republican lawmakers to support an economic relief package higher than the $2.2 trillion proposed by House Speaker Nancy Pelosi. “It’s very simple. I want to do it even bigger than the Democrats,” Trump said on “Fox & Friends.”

But top Democrats, led by Pelosi, have largely rejected efforts to pass piecemeal legislation. On Sunday, Pelosi said she and Treasury Secretary Steven Mnuchin needed to reach an agreement within 48 hours if they want to pass a coronavirus stimulus relief bill before Election Day.

“The 48 only relates to if we want to get it done before the election, which we do,” Pelosi said in an interview on ABC’s “This Week.”

But that 48-hour deadline came and passed Tuesday with no deal.

Pelosi is putting pressure on the Trump administration to cut a deal soon because the legislative process in the House and Senate will take time ahead of the election. Democrats and Republicans generally agree the country needs a stimulus bill for the economy, but the two sides differ on the scope and size of the bill.

Democratic House leadership insists that any legislation needs to contain $500 billion in aid for states. But Senate Majority Leader Mitch McConnell dismissed the idea of allowing states to use federal funds to help them make up for budget shortfalls.

On Saturday, McConnell announced there would be voting on stimulus measures, including a stand-alone Paycheck Protection Program bill to help small businesses, on Tuesday and Wednesday. But Democrats are expected to block his effort.

“That is just a sham,” Schumer said on the call. “It’s a stunt by Sen. McConnell when he’s blocked everything that’s happened so far. And in terms of getting an agreement, he’s even said he wouldn’t go along with what Donald Trump wanted.”

As Congress goes back and forth about whether a second stimulus will pass, the most vulnerable Americans are hurting.

As a bartender, O’Brien made most of his money from tips. The unemployment checks he now gets are only about 15 to 20 percent of the money he used to bring in. And he wants to get back to work but can’t take just any job because he also cares for his 78-year-old mother, who has health issues.

“I’m back down to $106 a week, which is gone away before it even gets here,” said O’Brien. “In fact, the next four weeks of it are already gone. … I didn’t just quit my job because I’m lazy. My industry evaporated.”

While O’Brien is still undecided on who will get his vote for president, he says his vote for Congress is fully dependent on who is able to get a stimulus bill signed first.

“My vote for Congress will be 100 percent dependent on whether or not a stimulus deal is at least achieved, if not signed, by the day of the election,” he said. “I live in a swing district … that went for Trump by 7 points four years ago. … I can’t reward Nancy Pelosi if she won’t bring this across the finish line.”

O’Brien added that he feels voting is the only leverage Americans have in the fight against elected leaders.

“That’s all these people understand,” he said. “They only care about votes. They don’t care about voters. And once the election is done, we’ve got two years before they actually pay attention to us again. So our leverage as voters is now. They talk about their leverage over Republicans, or Republicans have leverage over Democrats. Our leverage is not in blind, partisan loyalty or ideological loyalty. That isn’t going to cut it for the American people. They need to be worried about their jobs.”

As more time passes, Americans don’t care how it gets done, they just want something done. Two-thirds of voters say Congress should focus on passing more COVID-19 relief for struggling workers and businesses before considering Supreme Court nominee Amy Coney Barrett, according to a recent Yahoo News/YouGov poll.

The survey, which was conducted from Oct. 9 to 11, found that large majorities of the public think Congress has its priorities backward. Not only do more than three-quarters (77 percent) of registered voters want legislators to approve another major pandemic relief package; 66 percent want the Senate to vote on it before voting on Barrett’s nomination. A full third of Republicans (33 percent) agree.

But to date, there’s still no second stimulus bill. Meanwhile, millions of Americans nationwide are falling below the poverty line without government aid. The number of Americans living in poverty grew by 8 million since May, according to a Columbia University study. The study found there was an increase in poverty rates after early coronavirus relief ended without more to follow.

In the first stimulus bill, the federal CARES Act, Americans received a one-time stimulus check of $1,200 and unemployed workers got an extra $600 each week. This move was successful at offsetting growing poverty rates in the spring, but the effects were short-lived, researchers found.

For Kim Lema of East Providence, R.I., a second stimulus check is just as much of a priority as protecting herself from exposure to COVID-19. As a disabled woman who suffers from leukemia and emphysema, Lema, 50, has already lost her boyfriend’s father and close friends to the virus. She’s scared to leave the house aside from getting the essentials for her own safety, but she also needs government support.

“[The government] needs to help us, and they need to help us all now,” Lema told Yahoo News. “I canceled my holidays. There’s not going to be Thanksgiving at my house. I’m scared, but we need the money because the cost of living is [growing] right now. And we can’t do it by ourselves.”

Lema believes both Democrats and Republicans should shoulder some responsibility for the failure to pass a second stimulus thus far, but she feels the GOP deserves more of the blame.

“Republicans are helping the big companies by giving them tax breaks and giving them money,” she said. “I don’t think the millionaires deserve any money right now. It should be for the people that need it. We need it. They don’t need it.”

Aside from the partisan issues, Lema says a deal needs to get done.

“Republicans and Democrats right now need to put all their politics aside and sign the stimulus package for the American people,” she said.

The uncertainty over a second stimulus bill is also a concern for some indigenous communities, where COVID has hit particularly hard. Data from the Centers for Disease Control and Prevention shows that Native Americans are 3.5 times as likely to contract the virus as white Americans. The shutdown shuttered many Native Americans’ businesses, including casinos, and entire tribes have been unable to generate enough money to live off of.

As the tribal elder of the Narragansett Indian tribe in Rhode Island, Bella Noka takes on many of the responsibilities of the people within her community. Even as she’s hampered by her own health issues and having been out of work, Noka, her husband and her college-age son have had to depend on just one income to get by. For Noka, getting a second stimulus would benefit her personally and could be the difference between life and death for some of the older people in her tribe.

“It’s not just about me, but those around me who are suffering and being more affected than I am,” Noka, 55, told Yahoo News. “In the Narragansett culture we need our family. We need our people and we honor our elders. It seems like this administration has no respect for those with preexisting health conditions or our elderly.”

The full impact on the Native American population is still unclear due to the frequent exclusion of indigenous communities from data used in health policymaking, crippling what is known about population.

Noka believes that the Trump administration has yet to show it cares about her community. Instead, she has had to personally shoulder a greater responsibility for her tribe when it comes to figuring out a way to make ends meet.

“As the matriarch of our tribal nation and an elder, I have a great responsibility of protecting our people,” said Noka, who pointed out there are fewer than 3,500 members in her tribe.

“If I get infected, if I get sick, I can wipe out a whole nation,” she said. “You have eagles, bengals, tigers and whales that are protected if there’s less than a certain amount. We have 3,500. If I get infected and I infect others, there are no more Narragansett.”

As an independent, Noka says she has voted Republican in the past, but this year she believes that the Joe Biden and Kamala Harris ticket is what’s best for the country.

“I voted for Reagan when I was 18 years old,” she said. “I follow what’s best and I listen to the best argument that works for the people, not just for myself.”

In the meantime, the negotiations over the second stimulus continue. During a Bloomberg TV interview Tuesday afternoon, Pelosi appeared to walk back the 48-hour deadline, saying she was “optimistic” about progress in discussions with Mnuchin, who serves as the White House’s main negotiator.

“It isn’t that this day is the day we would have a deal,” she said. “It’s a day when we would have our terms on the table to be able to go to the next step. Legislation takes a long time.”

But O’Brien, the former bartender from upstate New York, believes it’s past time for current government leadership to step up in the best interest of all Americans now and pass a second stimulus bill.

“They say save money for a rainy day, but this is the rainy day,” he said. “You need to help the American people. You’ve always been bailing out each other, lining each other’s pockets. … Now suddenly when it comes to us, you want to pinch pennies? No.”