Afghan fears rise as US ends its longest war 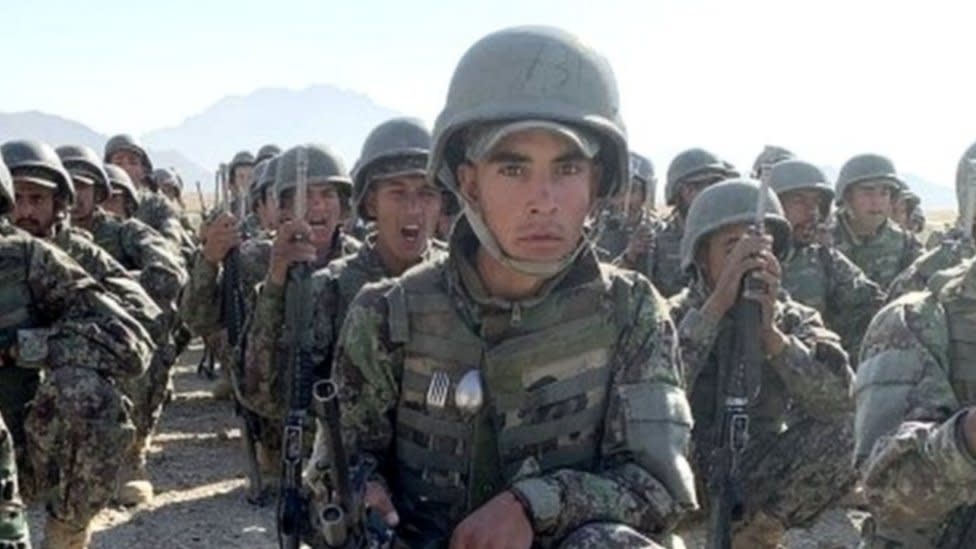 The Taliban are advancing while peace talks stall. What are the chances for peace once the last US-led Nato forces leave? Lyse Doucet looks at a critical time for Afghanistan.

The simple monument is stark and sharp-edged, a pointed block of black-veined marble memorialising a dark chapter in northern Afghanistan during a momentous history.

At this hour, as America edges closer to ending its longest war, it seemed fitting that a visiting delegation of senior American and Afghan military officers should pause at this spot to acknowledge a 32-year-old CIA officer – the first US casualty in the war to topple the Taliban in 2001.

Chiselled in Persian script and in English, this marble marker honours Mike Spann, who was killed in a frenzied and bloody battle in November that year: “A hero who sacrificed his life: for freedom; for Afghanistan; for the United States of America.”

Nineteen years on, after the deaths of more than 3,500 coalition forces and more than 110,000 Afghans killed, the overriding concern is averting a chaotic conclusion – at worst another descent into civil war – as the countdown gathers pace for the gradual removal of the last US and Nato forces in Afghanistan.

‘All sides’ must reduce violence

“What we are trying to do is prevent any negative outcomes and keep pushing the situation back into a place where Afghanistan is not faced with civil war, or even less stability than it has now, ” says the top US soldier in Afghanistan, Gen Scott Miller, who commands Nato’s Resolute Support Mission.

The Taliban, now at their greatest strength since 2001, are advancing and attacking in districts across Afghanistan – despite a deal signed with the US in February which seemed to promise a respite to a nation exhausted by war and increasingly worried it will only get worse.

“The violence must come down,” Gen Miller repeatedly emphasised in a rare interview with the BBC during one of his regular stops at American and Afghan military bases across the country. He is meeting civilian and military leaders charged with ensuring the best possible transition.

“I am specifically asking the Taliban to bring down the violence and it can’t be one-sided; all sides need to bring it down.”

Under the terms of the February agreement, signed after more than a year of arduous negotiations in the Gulf state of Qatar, the last of 4,500 American troops, and 6,100 other Nato forces, are expected to leave by May of next year.

But the agreement says that is contingent on the Taliban meeting their commitments – including cutting all links to extremist groups like al-Qaeda. They want to to ensure Afghanistan does not become a haven to mastermind strikes like the 11 September 2001 attacks which catapulted Nato forces into this crucial and costly engagement.

Not a single American soldier has been killed in Taliban attacks since February. But the deal’s reference to reducing violence against Afghans is vague, and is now the focus of conflicting interpretation and argument.

That’s kept Gen Miller and US envoy Zalmay Khalilzad constantly shuttling between cities including Doha and an array of regional capitals whose longstanding meddling in Afghanistan is also on a worrisome spiral.

Serving soldiers avoid discussing the sensitivities of a tumultuous American election back home and the vagaries of a commander-in-chief with a penchant for upending policy with unpredictable tweets.

US troops ‘home by Christmas’?

Another social media salvo from Donald Trump shot across Twitter last month, which had phones ringing from Washington to the front lines of this war: “We should have the small remaining number of our BRAVE Men and Women serving in Afghanistan home by Christmas.”

“Those are political decisions,” Gen Miller tactfully replied to a question on whether the early May timeline in the deal was still a credible target.

“We make military recommendations. And I’ll leave that for policy guidance and a view on how the peace process is going.”

The US deal had also paved the way for historic peace talks which began last month between Taliban and government negotiating teams.

An encouraging start seemed to highlight a commitment to focus on the negotiating table rather than the fight.

But an impasse over sensitive procedural questions including Islamic law has also concentrated minds on the risks of failure.

“We’re doing everything we can to give peace with the Taliban a chance,” emphasised Afghanistan’s national security adviser Hamdullah Mohib as we sat on the sprawling lawn edged by bushes of bright roses in the heavily fortified presidential palace compound in Kabul.

“But peace and war go together and we are also preparing for other scenarios.”

Outside this magnificent 19th Century Arg fortress, bolstered by ancient stone walls and now successive rings of steel, nerves are jangling across Afghanistan amid reports of Taliban fighters stealthily encroaching on key towns and cities, including Kabul itself.

Gen Miller’s mission this week to the western province of Farah, like his recent stop at the Afghan army base in the walled Qala-i-Jangi fortress in the northern province of Balkh, was part of intensifying efforts to signal continuing US support to beleaguered Afghan forces – even when the clock is ticking and there’s a cascade of conflicting statements from Washington over the timing of the pull-out.

On every stop, Afghan and American military and civilian officers, in circles of comfortable chairs suitably spaced in this time of virus, share assessments of the strength of Afghan security forces in the face of a Taliban insurgency seeping into Afghan lives.

The details are different in each province’s tally on its security score card but the direction and dangers are much the same: Afghan security forces including special forces inflicting defeat and casualties in some battles; losing ground in others; and gratitude for continuing US air support which has made the difference, time and again, in denying Taliban fighters the prize of a provincial capital.

“We’re surrounded,” was the plea for help in Farah to an American general who kept consulting the map of districts where main roads are off limits to Afghan government forces, and pressure mounts on supply lines.

“It’s difficult now but we’ve confronted even worse conditions before and Afghan leaders will do it again,” he said in reference to the earlier campaign by Western-supported mujahideen against the Soviet-backed army in the 1980s.

But the descent into chaotic civil war among armed factions which followed the Soviet retreat in 1989 is also uppermost in Afghan minds.

“My personal worry is our own failure,” reflected Hamdullah Mohib when I asked about his main concern now.

In a stark warning that the threat of civil war was “very likely”, he emphasised that the entire leadership of the government was now doing “all we can to mitigate it”.

US airpower, one of the most powerful weapons in its Afghan arsenal, turned the tide again this month when Taliban fighters, testing Afghan strength, and US resolve, went on the offensive in the strategic southern province of Helmand and overran government check-posts in its main city of Lashkar Gah.

“Yes, the American help was critical in Helmand,” conceded Mr Mohib. But, as to speculation that Taliban fighters will storm provincial capitals after US planes stop their sorties, he emphasised that Afghan security forces “have been doing all the fighting” and making steady progress on other fronts, including the training of Afghanistan’s own pilots to man their own warplanes.

The US’s blistering aerial attacks in Helmand provoked furious Taliban accusations that the Americans were violating the terms of their deal.

“We will defend the Afghan security forces,” emphasised Gen Miller with a further hint of US resolve if it continues to be tested.

“We’ve shown a great deal of restraint because we’re trying to make the peace process work.”

But, with every month that passes, there are also signs on the ground that the mighty US Army is finally packing up.

In Bagram, a bustling hive of a town which mushroomed over the years alongside the US’s biggest military base, there’s a constant clatter of helicopters and hulking military transport planes as US hardware is ferried out. The fate of this vast compound is still uncertain but a shifting perimeter fence has already retreated by a distance of several football pitches.

And the lifeblood in this town is now draining too . Some of the shops which made handsome profits selling army surplus, from nearly-new boots to computers and treadmills, are now shuttered.

We were approached on the streets by Malik who, like tens of thousands of other Bagram residents, used to work at the base.

“I sold my wedding ring, because I don’t have any money or anything else at home,” Malik, 28, told me as we stood on the cracked expanse of concrete which used to be inside the base. “I sold it to buy food for my children.”

His fear was palpable.

“One hundred percent, Taliban are here,” he shouted, his voice rising in alarm. “They are here, amongst us.”

In Afghanistan now there’s a profound sense of uncertainty over the future, including the outcome of the looming US elections. Whether a Trump or a Biden presidency emerges, bringing different approaches to this decisive drawdown, it seems certain this mission’s days are numbered.

Washington’s main red lines will be drawn by assessments over the threats to America’s own security – even if Afghan peace talks drag on, as they’re likely to do. But as the clock ticks down, its top soldier on the ground has a legacy on his mind that is at the top of the Afghans’ list too.

“My greatest concern,” Gen Miller emphasised, “is that Afghans miss this opportunity for peace.”